Good News for Over 40 Athletes!

In 2010, a survey by Celie et al (in the European Review of Aging and Physical Activity) involving a test group size of 200,000 participants in a 15km (9-ish miles) road race revealed very interesting results. Being an analyst by day, I love this kind of research. Here’s what they found: 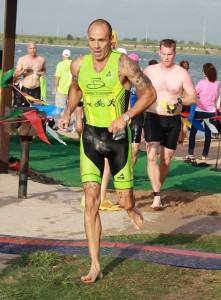 The study also separated runners into “trained” and “untrained” categories. It turns out that trained runners were almost 16% faster than untrained ones.

Another study was done in 2003 by Stephen Bird on highly competitive male runners. After a battery of tests, they found that 10k race performance decreased at a rate of about 0.5% per year (just under 2 seconds, per mile, per year). More interesting were the results on the other tests involving physiological markers that are assumed to decrease with age (maximum heart rate, muscular strength, and oxygen uptake, etc.). These markers decreased significantly slower in the trained runners than they did in the general population. What’s more, while oxygen uptake and heart rate decreased with age, running economy—a measure of how efficient you are—hardly decreases at all!

Hello! As an “over 40” athlete, I think it’s high time we tossed out “old think”. Many declines in health will NOT occur in a body that works out and is fed with real, hormone & chemically free foods. Lifting weights, working out, running… is NOT age discriminatory. Rather, it is just the opposite. That’s some great news—and backed by science!

So, what are you waiting for? A wonderful mentor of mine likes to ask the question, “What have you got to gain?”